Noah’s Ark at the Skirball Center video on YouTube

Thoughts on the Noah’s Ark Exhibit at the Skirball Cultural Center in Los Angeles, CA

As you come into the grand driveway, you are astounded by the magnitude of the cultural center, the manicured gardens, and the elegant architecture. It was inspired by the American hopes of freedom and equality, and you feel that right from the entrance. It might not be possible to find place more full of love and harmony than the Skirball Cultural Center. Started as a place of meeting, the Skirball is rooted in the Jewish tradition. And it has become a true oasis in the middle of Los Angeles, California.

The Skirball welcomes people of all communities and generations to have a peaceful space in which to participate in cultural experiences that celebrate discovery and hope. It’s no wonder, with a mission this big and bold and beautiful, that the Skirball has established itself as one of the world’s most dynamic Jewish cultural institutions, and today, it is among the leading cultural venues in all of the greater Los Angeles area.

As a family with four young children, we were drawn to the Skirball Cultural Center because a friend recommended their award-winning exhibit about Noah’s Ark, which is home to a floor-to-ceiling wooden ark, filled to the rafters with whimsical animals. But that’s only one part of this masterpiece of a place. Noah’s Ark is heralded as one of the most innovative play spaces in the city of Los Angeles, and we would soon discover that it is so much more than a play space — it is a living STORYBOOK.

Although the exhibit opened in 2007, it’s popularity never seems to decrease. Visitors buy purchase tickets well in advance and admission is timed and limited. Nearly every time slot sells out. So, is it worth it to get this tough ticket? Without a doubt, that’s a resounding YES.

As we travel to 50 countries in 24 months making 500 Films for Families, we are taking the approach of SPIRAL LEARNING. Spiral Learning is based on the idea that a student doesn’t have to learn too about a subject or idea all at once, just so they can be tested on it, and quickly and move on to the next subject.

Instead, the student learns a little about a subject each time the topic is encountered. Like a metaphorical spiral, with each encounter, their understanding increases in complexity and reinforces their previous learning.

Our kids have grown up with the story of Noah’s Ark as a bedtime story, which we personally believe to be true, based on our faith perspective and archeological evidence: https://abcnews.go.com/Technology/evidence-suggests-biblical-great-flood-noahs-time-happened/story?id=17884533. As our kids grow, they encounter the story numerous times in books, art projects, lessons, and more.

While at the Skirball, we found out that there are over 500 legendary stories about a Great Flood in cultures all over the world. Wow! Even as an adult who has traveled extensively, I had no idea how deep and rich the history of the flood actually is.

But to get your head around what actually happened in the story, one has to seriously think through the numbers, the logistics, the timeline, and most importantly, the promise delivered at the end of the story.

The experience of the Noah’s Ark exhibit begins with a storytelling, providing context for what the kids area about to experience. The art exhibit is designed mostly with recycled materials turned into pieces of the exhibit and even the animals. It is an epic work of art. The tie in recycling is that in the story of the flood, the world was given a second chance, just like the recycled materials.

Moved by the story and processing the magnitude of it, we entered the 8,000-foot gallery.

To begin their hand’s on experience, the children engaged with a “conduct-a-storm wall” using the tubes, cranks and instruments to create the rain. One pushed the air into a cylinder and created a cyclone of wind, swirling higher and higher. Another pumped water into a tank to reenact the wooden ark float higher in elevation on the rising tide. A their sister made cracking bolts of lightning to above the ark by using shakers to create the sounds of the storm.

As we turned from the storm wall, we were stunned by the massive 65-foot ark, which was made out of sustainable hardwood. Inside and outside the ark, the kids found dozens of painted wooden animals, and they were delighted to be invited by the museum staff to touch everything and play with everything! Immediately, they took to the ropes course inside the ark, made of 30,000 hand-tied knots which made a series of tunnels, suspension bridges, catwalks and challenging climbing areas.

Our kids helped to bring the animals onboard by placing them two-by-two onto a conveyor belt and moving them up by a hand-crank. Inside the ark, the girls engaged with all the beautiful animals, many of them moving in some way or another, some puppets, some stuffed animals, all unique in their own way. They helped feed and care for the animals (even scooping up “animal droppings” and cleaned the boat deck, and other such tasks). By play-acting the story, they were able to add greater imagination and gravity to the great task of Noah and his family had in caring for all 70,000 animals that were most likely on the ark, (according to estimates).

Our oldest daughter, the artist, really enjoyed the quiet art studio and reading room  in the exhibit, where she could process what she learned. There, the walls change color, day to night, light to dark, and every once in a while, a rainbow. And outside, there is a finally surprise, an outdoor play area with a 100-foot-long, 12-foot-high curved metal sculpture looking much like the prow of a ship. The prow hosts mist sprayers that produce tiny water drops and create stunning refracted rainbows, reminding us of the promise made to Noah and his family after landing the ark: that the world would never again be destroyed by a flood.

It is a promise of second chances, a new beginning. Wouldn’t we all like to have fresh, new life, pregnant with the possibilities of what we could do (or NOT do), if we could just … start over?

To say we were deeply moved and delighted by this experience at the Skirball Cultural Center would be a massive understatement. From a spiral learning perspective, we couldn’t have found a more meaningful way to engage with the story, and the lessons learned will provide a framework for our upcoming experiences at another exhibit of Noah’s Ark at the Museum of the Bible in Washington, DC in July, as well as the travels throughout the Middle East, the origin of the world’s story in December and January.

Special thanks to the Skirball Cultural Center for hosting us and working with us on this film. We are forever fans! So grateful for their important work in the center of LA. 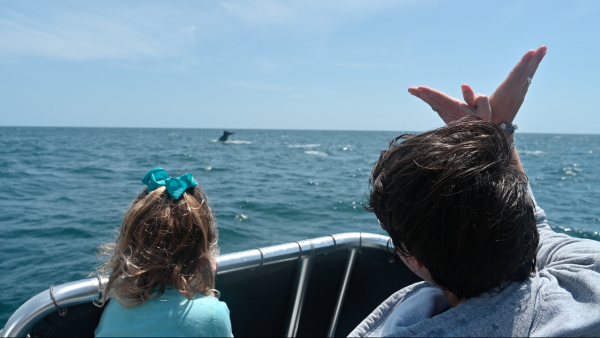